— It is psychologically very difficult when you say to a person that he needs good nutrition to overcome his illness, but you see that he does not have the opportunity.

Nelly Nersisyan has been working in the Armenian Red Cross for nearly 40 years, of which 18 have been involved in working with tuberculosis patients.

The Armenian Red Cross Society (ARCS) has been one of the key actors in the country with tuberculosis patients and has supported the implementation of the National Tuberculosis Program of the Ministry of Health for about eight years.

As part of the Global Fund-funded Social-Psychological Assistance for TB patients, the ARCS has implemented socio-psychological support and education for all patients registered in Armenia, both physically and drug resistant, providing social and psychosocial support to patients with Disease and Treatment the necessary knowledge and information. At the same time, in collaboration with the ICRC, there was an opportunity to work with especially vulnerable drug resistant TB patients who received individual psychological counseling and social support.

— Most of the patients are socially insecure people who do not have the main place of residence, phone, and most importantly lack of information, do not know what will be the cure for cure or medication inconsistent, and the result can be drug resistance, which will further complicate the further treatment «says Nelli Nersisyan.

Tuberculosis, including drug-resistant forms of the disease, is still relevant among vulnerable groups of the population, such as homeless people, extreme poverty families, migrant workers and their families.

«The families sometimes get in touch with us so that neighbors cannot see and know, and we create conditions to meet and talk in other places,» Nelly Nersisyan tells when describing the difficulties. 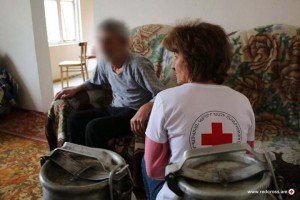 At present, the ARCS, in collaboration with the TNC SNCO and funded by the Global Fund, implements the program «Stigma and Discrimination Reduction and Social-Psychological Assistance» for tuberculosis patients. Beneficiaries are patients who have less than 90% of polyclinic.

— We follow them to continue treatment, provide psychological support to family members, and organize rallies and events against stigma and discrimination, and we are in close contact with employees. The role of our volunteers is that they follow consistent treatment, meet and talk with newly registered patients.

This year, the Armenian Red Cross Society has joined Public Awareness Campaign initiated by the American University of Armenia (AUA), Turpanjian Public Health Faculty, the Ministry of Health (MoH) and the National Center for Tuberculosis Control (TNC), dedicated to the fight against tuberculosis (TB).

— We will travel to the districts of Gegharkunik, Tavush, Lori and Aragatsotn to investigate Tuberculosis-specific traffickers. All researches will be organized in consultation with doctor-psychiatrists. Our Volunteers will actively participate in events dedicated to the Day of Tuberculosis. The American University has provided printed information materials that will be distributed on-the-spot and provide verbal information to the event participants.