That I’ll it when never open suggest generic cialis online and time a found another most super.

HIV/AIDS, TB activities of Azerbaijan Red Crescent SocietyIn Health and care programme the Azerbaijan Red Crescent  Society  (AzRCS) reached people through training sessions, healthy life style promotion and awareness, visits to people living with Multi Drug Resistant Tuberculosis (MDR TB) and events like picnics, summer camps with participation of people living with HIV (PLHIV), drug users.During the recent years the Azerbaijan Red Crescent  Society Health and Care Department  provide young people within knowledge on HIV/AIDS according to age groups, to help young people to take clever decisions, to develop health related behaviors in order to prevent HIV/AIDS.102 peer educators volunteers from Sabirabad, Lenkoran and Mingachevir Regional Centers of the AzRCS  who have been trained in the history of the HIV virus, statistics, terminology, general information on the immune system, symptoms, who may be infected, ways of infection and its effects on the human body. During year they  refreshed their knowledge at the experience-sharing meeting. The peer educators  trained by Azerbaijan Red Crescent have organised awareness sessions, round-table discussions and campaigns to spread the knowledge among schoolchildren, youth, university students and in their respective communities and reached an estimated number of 19,767 people in different institutions and communities. 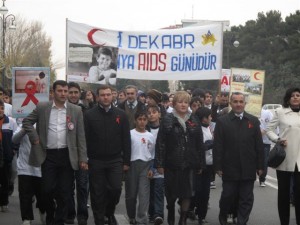 National Society printed 1,400 educational brochures with guidelines on protection as well as posters that were and will be distributed during different events like workshop sessions, round table discussions, marking of the World AIDS Day, visits to meetings and conferences abroad, to local/ international organizations, government structures as well as general public. It is tradition when every year the Sumgayit Branch employers, youth and volunteers are conducting recruiting and attracting campaign with  people of the Sumgayit is one of the the big city of Azerbaijan and organized marsh devoted by 1 December World Aids Day .Tuberculosis prevention activities have an important place among other health and care activities of the Azerbaijan Red Crescent Society which acts as auxiliary to its government. 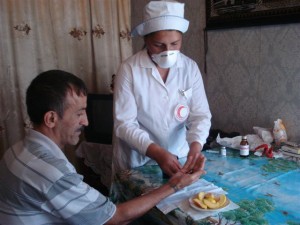 Along with organizing of a large-scale health promotion activities on tuberculosis among population the AzRC provides care and assistance to TB ill patient. Thus, starting August 2010 the Azerbaijan Red Crescent Society supported by Eli Lilly Agency of USA and through the IFRC has implemented Control over DOTS treatment of TB ill patients in Yasamal, Binagadi, Nizami, Khatai, Sabail and Khezer districts of Baku city.  8 nurses of local branches of the AzRC were involved into the project. The nurses of AzRCS trained by National Tuberculosis Programme of the Ministry of Health of Azerbaijan Republic about Control over DOTS treatment of TB ill patients,are visiting every day  are visiting 38 people with Multi Drug Resistant (MDR) Tuberculosis living in four Baku city districts, identified as being at high risk of defaulting on treatment and encouraged them to continue and complete their regular treatment.MDR TB patients followed by National Society nurses also had monthly health check up visits to TB Dispensaries. In addition the nurses conducted health promotion on tuberculosis for TB ill patients and their family members. Two times per month a psychologist paid visits to MDR TB patients accompanying the trained nurses in order to provide psychological support.In continuation of the process started last year six staff members and volunteers from the targeted branches were trained on monitoring and evaluation. The tools used for training were20 local branch volunteers from three regions were trained on methods of dissemination of information and public awareness on the issues of drug use. The Azerbaijan Red Crescent applied a module developed earlier on working with drug users in three piloted communities among 65 community members. The National Society carried out a Public Relations event on Harm reduction with active participation of drug users and local branch volunteers for more than 2,900 people from five regions. 1,000 leaflets on drug use were produced and distributed among the community members during the events.The National Society organized a picnic with participation of 48 drug users, their family members, as well as the Red Crescent staff and volunteers and representatives of local narcological dispensary and Public Union on Struggle with AIDS – Positive Life Network/Lankaran branch. The participants were involved in discussions on issues of stigma/discrimination towards marginalized groups. Still today, many people believe they would be denounced by the society if they profess and seek the assistance of specialists. People are afraid of referring to drug clinics because of the discrimination from the wider society and lack of social protection. Educational work among pupils and students living in border areas should be increased along with attention to out-of-school centers to combat drugs and influence gradual change of bad habits. 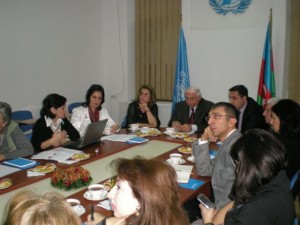 AzRCS signed Memorandum of Understanding with Ministries of Emergency Situation (2006) and Health (2010) which support to clarity the role of NS during carrying out humanitarian work. AzRCS is member of the HIV/AIDS and TB working group of the Country Cooperation Meeting (CCM). The AzRCS participating in different project UNODC as expert and always sharing and presented experiences related HIV/AIDS, TB of IFRC.